Okay, so, while I was searching the internet for a decent cake recipe for my bf's birthday, I stumbled upon this site. A young, beautiful Brit who knows her sweets. She decorates cakes and cupcakes and cookies and has some of the most awesome tutorials on the net. I *highly* recommend her.
With that said, let me just jump RIGHT into the recipe...
Here's your goal!! 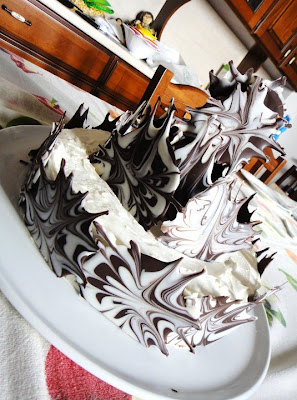 Note: You can tack these chocolate marble medallions on any frosted cake of any size or shape. I baked a basic round white cake with cream cheese frosting. You can also use plain white chocolate and mix in food coloring to get multi-colored medallions.


In a double boiler, melt the dark and white chocolate separately, adding a tablespoon and a half of vegetable oil to each bowl of chocolate to get a liquid consistency. 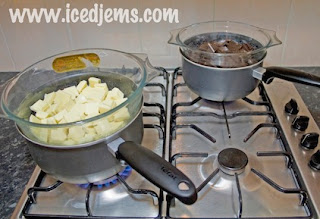 On a large sheet of parchment or wax paper, pour a spoonful of dark chocolate and make a disc shape spreading the chocolate using the back of the spoon. The discs should be about 4″ or so in
diameter. 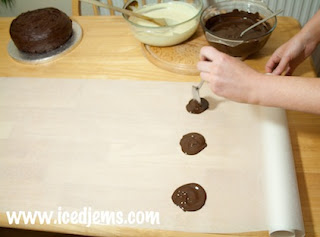 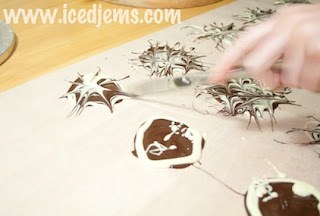 Then, with a knife, cut through the chocolate discs in different angles to spread the white and dark to make different designs. Careful not to overwork the chocolate as we do not want a big light brown blob, but rather a nice “web” design. 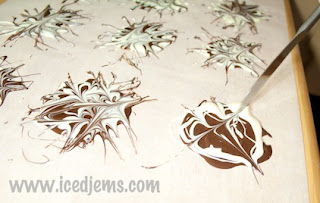 Allow the chocolate to set and harden. Dip a sharp knife in hot water after the chocolate has set and slice off a small piece of each disc to get a straight edge. Now, gently press the discs against the frosted walls of the cake. 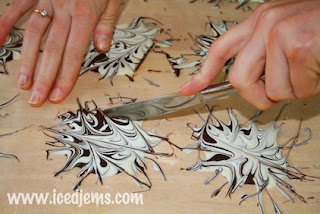 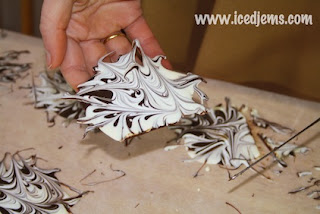 Now, where you would normally place a second layer of cake, make a slit with a knife all around (about 2″ from the rim of the cake) and stick in the chocolate discs, standing up, so that it resembles a second layer (refer to photo). The same with the ‘top’ or ‘third’ layer. Add a couple of discs in the very center and you could stack a couple on top of those so that it (the cake) looks taller. 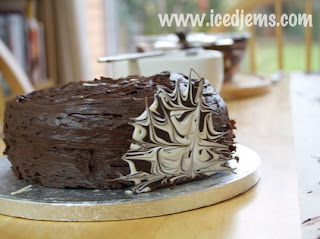 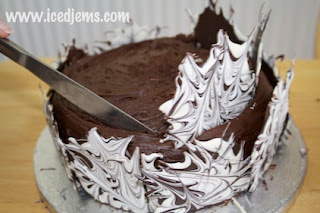 Note: You can tack the chocolate discs however you like, though this is the way that I did it. You can also make the discs larger (though, they become a bit more difficult to work with). The number of discs that you use all depends on how large the cake is. I had a few left over which turned out perfectly just in case I broke one.
Posted by Miss Mora at 6:50 PM 9 comments:

Miss Mora
Lecce, Italy
Just a simple girl who was born and raised on an island in the middle of the Pacific Ocean who moved to Europe. My boyfriend and I travel non-stop throughout Italy, France, Greece, Japan, United States and everywhere else you can imagine! Music is our job, but food is my passion! Join me on my travels, pit stops and culinary adventures!